ILWU Coast Committeeman Frank Ponce De Leon told American Shipper on Thursday, “Longshore workers have been moving cargo nonstop during the pandemic and want to continue to do so. But the skyrocketing rate of infections in Southern California is real and taking its toll.

“We are coming close to surpassing the number of infections that we had experienced in the last eight months of 2020 in just the first two months of 2021,” said De Leon.

“It’s impossible for dockworkers to ride in shuttle buses between terminals and work together to load and unload ships without having contact with hundreds of people per shift. The rate of infection is growing quickly.”

The doomsday scenario — COVID-induced terminal closures in California at the very height of the import boom — is generally considered unlikely. But it’s being openly talked about.

“If the catastrophic infection rates continue, there may be a need to close the San Pedro Bay Port Complex to protect the health and safety of the workforce,” executives of the ILWU dockworkers union warned in a letter Monday to the Pacific Maritime Association (PMA), which represents employers.

U.S. Reps. Alan Lowenthal and Nanette Diaz Barragan said in a letter to California health officials on Jan. 15, “Without immediate action, terminals at the largest port complex in America may face the very real danger of terminal shutdowns. This would be disastrous for … the entire nation.” 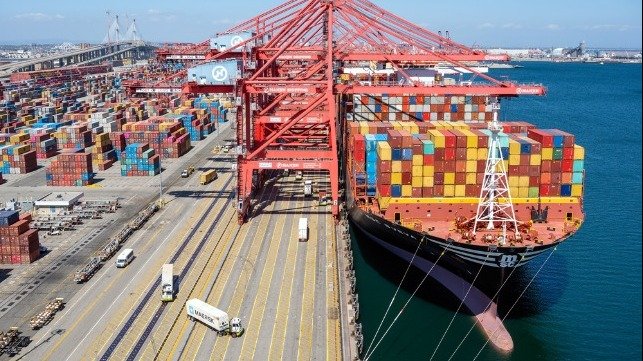 The ILWU reported that as of Sunday, a total of 694 union members had tested positive for COVID. Of those, 364 worked in Los Angeles and 330 in Long Beach. A total of 1,080 ILWU members were exposed to people with COVID.

Lowenthal and other politicians cautioned in a separate Jan. 12 letter to California Gov. Gavin Newsom that new emergency regulations of the state’s Occupational Safety and Health Standards Board “could further exacerbate constraints on critical supply chains.”

These regulations, effective Nov. 30, bar all workers testing positive and anyone exposed to someone testing positive from workplaces. Employers must report instances of three or more cases within 14 days. Workplaces with 20 or more cases in a 30-day period are advised to “consider halting all or part of operations.”

The ILWU alleged that terminal operators have not been reporting COVID cases to the Los Angeles County Department of Health to the extent required for workplaces with three or more cases within 14 days.

It noted that only one terminal, Fenix Marine Services, had reported cases. (As of late Thursday, Fenix remained the only terminal operator in the department’s case database.)

“We believe the vast majority of terminal operators are failing to report [cases] at all,” argued the ILWU.

Hacegaba responded that “speaking for [terminals in the Port of] Long Beach, we are not aware of any underreporting or misreporting.”

The ILWU stressed that if terminal operators continue to fail to report confirmed COVID cases among “all ILWU labor, management, vendors, all other workers and anyone who enters the terminal,” the union “will have no other alternative than to file complaints with all relevant agencies.”

Even if there are no terminal shutdowns ahead, COVID is already affecting trade flows through California ports. As previously reported by American Shipper, San Pedro Bay is a veritable parking lot of container ships waiting for berths.

Asked whether recent spot labor shortages were due to too much import volume or too few workers due to COVID, Sanfield replied, “Both. It’s a combination of a lot of things. Certainly, the unprecedented import surge we’ve seen for months now is at the top of the list. Then you layer less dockworkers than we normally have on top of that.”

On the same question, Hacegaba responded, “It’s difficult to segregate the factors. We have a historic cargo surge induced by the pandemic. A rush to get cargo in before Chinese New Year. And the impact of COVID on our workforce. There is a considerable percentage of dockworkers out sick because of COVID.

“It also goes beyond the ports. For example, to the warehouse and distribution sector, which has implemented new safety protocols due to COVID that affects their capacity. It’s a convergence of all of these factors.”